It's Only an Elven Moon (Part I) 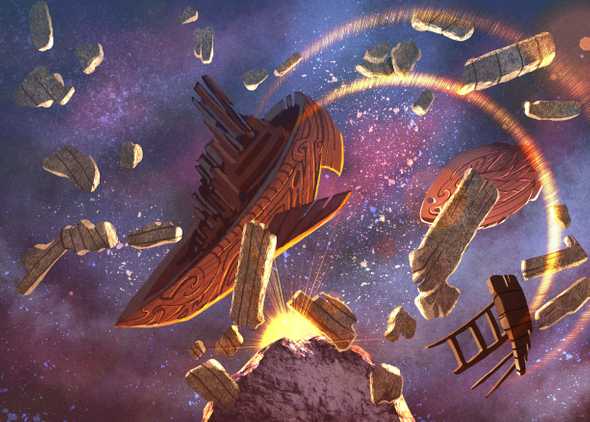 I recently decided to take up GMing again and what better way is there than to introduce four D&D players to an entirely new system and setting? My friends had never played a game based on the Fate system before and I have been pushing to get them to try it for a long time. The game I chose to shepherd their entrance to the system? Aether Sea. This game is far and away my favorite Fate setting. I sold the players on the setting with, “It’s Firefly meets steampunk Lord of the Rings.” Like the merry band of nerds my friends are, they could hardly resist.

For those of you that don’t know, a lot of games start with a session “zero.” Session zero acts as a pre-gameplay session in which you prepare for actual gameplay…but you know… together. In mechanic heavy games, this first session is often eaten up by character creation. In this case, I knew most of the time would be eaten up going through the new system and the setting. Fate doesn’t have to be like this. Fate is quite good at being flexible enough to get you out the door and into gameplay as soon as possible. I chose to intermix laying out the setting of Aether Sea along with the rules of Fate and character creation.

Fate is particularly strong at being able to get the GM and their players up, out the door, and playing even if the players are unfamiliar with the rules. This way the players are not bogged down by infodump and can learn as they go.

I did not pick this route.

I chose to lay out the universe of Aether Sea, the backstory, folk (races), magic, ships, and the whole enchilada before moving into character creation and explaining how things actually work. After that we could jump into the game and get started.

It actually wasn’t a terrible way to start. The players got a chance to let the world unfold and begin thinking about what sort of character they would want to play and where they might fit into the world. The real trouble came when I started explaining how Fate works.  I knew this was going to be a problem going in, so I was prepared. I was prepared incorrectly, but you know, I did it.

Explaining Fate – or – Where Things Got Foggy

One of the major differences between Fate and D&D is the narrative. Fate is largely narrative, both the GM and the players take on more narrative roles in an effort to craft a good story. D&D is largely mechanical with the GM having crafted the story and the players working their way through it. End sweeping generalization.

When presented with the ability to choose, well, anything players can often undergo a sort of “choice paralysis.” You have probably encountered choice paralysis before, albeit it was which of the 305 unique ice cream flavors you were going to go with. This paralysis becomes especially troublesome when you start explaining the differences between good and bad aspects and why they’re important to the game. Now the players want to make sure they make good aspects.

In hindsight, I should have gone the faster route and told them to start with High Concept and Trouble aspects and not to worry about Background or Ship. But nooo. I wanted them to establish a background and make sure the ship aspects were in place as well. Why? Let’s pretend I had a good reason. The players quickly underwent choice paralysis when it came to setting up their aspects. It may have had something to do with the eight page aspect example document I let them peruse through, thinking it was going to help. As they began wrapping their heads around aspects, they took even more time trying to craft a “good” one.

Moving Along … Towards a Part 2

We got there eventually. A few people were missing an aspect or stunt or two, but I gave my assurances the players could fill them in as it came up in play. I could tell they were eager to get going and I was eager to see if my GM chops were still up to snuff.

In the next post, I’ll talk about the characters and the custom beginning to the It’s Only an Elven Moon adventure they began with.

If you’re interested in the custom character and ship sheets I made for Aether Sea, you can check them out on the Fate Materials post.