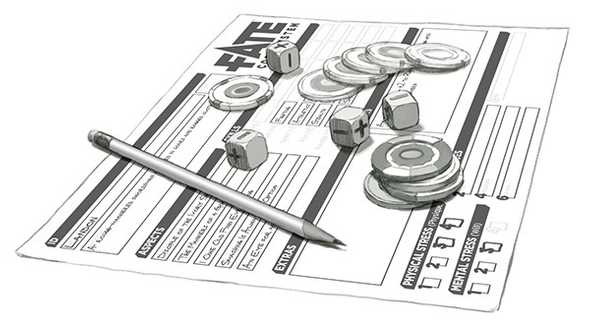 Here is a list of fate materials I use in my Fate games. Some of the handouts and printed sheets I made, some I found, some I stole. If you see something I “borrowed” from you and didn’t get credit for, just reach out and I’ll make sure to do so.

These are the general game materials I use to make my game run smoother and to craft useful handouts and materials.

I printed out about six copies of the FAE rulebook, folded, and center stapled them so each player would have it to reference. The Core rulebook is a little large to print out and center staple, and I have a hard copy, so I didn’t bother.

I re-created the Core and FAE character sheet in illustrator to use as a template for any other character sheets I wanted to custom make for the game.

Not everyone uses a shield for Fate – I don’t particularly care for it – but in this case there were a few things I wanted to have up for quick and easy reference. The GM shield I made takes inserts and it provided a safe place for me to fudge my rolls when needed (why fudge rolls? A debatable topic and one I’ll cover in another post).

I made my GM shield with posterboard, hockey tape (gaffer/cloth tape), and page protectors. It’s based on an instructional video for a small GM shield, but I added the addition of page protectors and made it fit 8.5″ x 11″ pages.

I have a number of cheat sheets handy, some that I put in the GM shield (outside facing the players AND inside for me) and some I handed  out to players to look over.

These are the materials I use specifically for the Aether Sea game. It requires a few extra or modified items from a standard lineup.

The Aether Sea game PDF comes with an included adventure, It’s only an Elven Moon. I was going to use that as the kick-off adventure, but I also wanted to give my players a printed handout of the game. Editing PDFs is fairly simple, so I broke my version out into a “Player’s Guide” and an “Adventure Module”. After printing and center stapling the player’s guide, each player got their own little game manual.

Unlike some Fate games, Aether Sea does not come with a character sheet (or ship sheet). So, me being me, I made one. I used the FAE Character Sheet template I had made previously, and styled it to fit the Aether Sea. I also made a ship sheet tailored specifically for the rules of Aether Sea. They each come with a handy cheat sheet.

You are free to use them in your own sessions. If you note any mistakes or want to recommend any changes, leave a comment.